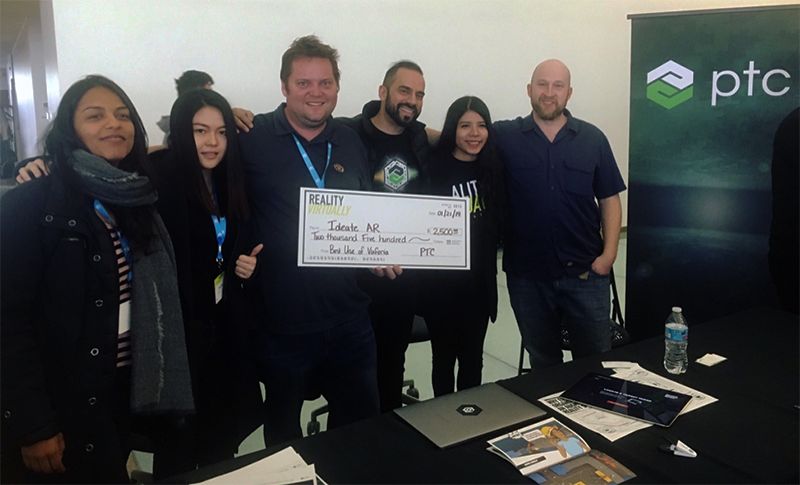 MIT recently hosted what many consider to be the most prestigious virtual reality hackathon in the world, and two of Intouch’s own were there to take home a prize!

Of the more than 1,500 who applied, only 433 people were selected, including two Intouchers: Jacob Shepherd, director of disruptive strategy & product development, and creative technologist Matt Bell. Participants – of which 40% were women and 20% were designers – represented more than 35 countries.

After working at Intouch over the last seven years, I’ve been constantly inspired by our commitment to promoting diversity. We look for opportunities to participate in community activities centered around this cause, and were thrilled to participate in the MIT Media Lab’s Reality Virtually event in Boston this year.  We look forward to continuing to collaboratively drive thought leadership and innovation in the augmented and virtual reality industries! – Jacob Shepherd

After the workshops, individuals broke into groups based on categories of interest – social good, mobility/communication, health/wellness, art/media/entertainment, games/learning, industrial/commercial, and productivity – to pitch their ideas, recruit talent and form teams. Each group was encouraged to maximize skillset diversity by selecting a blend of developers, designers, UX, and storytellers to create a team with a maximum of five members.

More than 50 mentors with experience in development, design, 3D artistry, and other areas of expertise facilitated team formation. They also provided support and guidance through feedback, ideation, project scoping, and suggestions/tips during the hackathon. By the end of the first day, there were 105 teams, including team “Ideate AR,” which included two Intouchers and three hackers from China, Colombia, and Mexico. The team’s goal was to redefine the future of idea sharing by building a collaboration tool that lets users physically pull content from whiteboards, printed material, and their favorite digital devices into a shared holographic workspace – check out the video here to see how it works.

One mentor, Ferhan Özkan, was impressed with the team’s ability to quickly rally around the cause, saying, “It’s rare to see a team from this many backgrounds work so well together just minutes after meeting.”

Over the next few days, teams worked tirelessly, keeping an eye on the judging rubric – which included a combination of innovation, technical merit, impact/potential, sharing/collaboration, artwork/storytelling, and code commits – to bring their vision to life.

On day 3, each team was given 10 minutes to present, show their concept video, and immerse each judge in the experience. Judging continued into the evening, with sponsors evaluating projects tailored to their brand’s platform, software development kit, or area of interest – such as accessibility, data visualization, and more.

Following the previous night’s post-hack party, organizers Arpit Gupta, Steven Patterson, and Scott Greenwald opened the final day by congratulating everyone on making it through the event, and encouraging them to keep projects moving forward by asking, “What are you going to do from here?”

Next, teams were invited one by one to the stage for awards, and during the closing ceremony, venture capitalist firm _underscore.vc announced three teams – Ideate AR, Accessibild, and Cosmos VR – as winners of a mentorship prize and finalists to return to Boston to pitch, Shark Tank style, competing for a $30,000 grand prize.

Other winning projects were built around augmented reality in cars, social causes such as helping with disaster relief, health-enabled applications to help the elderly and disabled, physical therapy in VR and more.

For a full list of submissions, descriptions and prizes awarded, check out the Reality Virtually 2019 devpost here: https://rv2019.devpost.com/submissions

What will the metaverse look like and who will use it? And should pharma marketers even care about the coming hybrid environment? Andrew Grojean recently shared his thoughts with Endpoints. Learn more!

How Pharma Can Play With the 1 Billion Users of TikTok

TikTok is currently the number one social app in the world, but how can pharma marketers make a mark and connect with patients on this platform? Find out from two Intouch experts.